I love the game of football.  Not so much for the action or the violence or anything quite as masculine as that.  I’m a fan of strategy.  What the average Sunday watcher doesn’t see is the block that gets made which opens up a hole for the running back to run through. Everyone on the field is important, even a wide receiver on a running play!

When I reflect on my own life I think we can learn a lot from football in this aspect.

There are very few moments when I can claim I heard God clearly.  I will tell you boldly that we have a relationship but the clarity of His voice isn’t always there.  One time a few years ago I asked (ok pleaded) that God would use me.  He said,

“If you want to be used, you need to be usable.”

At the time I had a bad attitude, I was selfish and although to the outsider it looked as if I was doing the right things, it was a show.

Later that year I felt led to start a non-profit called Heroic Event (currently being re-designed) and throw an event or conference designed to highlight businesses and non-profits that were making a difference.  The event was one of the hardest things I’ve ever done and if judged by attendance, it was a huge failure.  Dejected, I cleaned up after the event and headed home.  On the way there I prayed, “Why Lord?  Why would you lead me to do this only to have it fail?”

“If you want to be used, you do not get to choose how you are used.”

The conference we had set up was able to see 300 and it was at an arena.  In addition, the speakers we had lined up were CEOs and Non-profits of some of the most successful in the Atlanta area.  Unfortunately, we only had about 45 or so people show up, including my Mom and the speakers themselves.

There was one woman in tears at the event. She would later say it was the inspiration she needed to get on with her life.

I was reminded of this when I prayed and God showed me something, “what does it matter to me if I (HE) loved her so much He caused me to act?”

That settled it.  The event was a success.  Maybe not in the world’s eyes, but if I was moved somehow to allow God to touch someone then it was a touchdown for me.

I think we often compare ourselves to the players scoring the touchdowns.    I don’t think we’re prideful in this comparison in terms of we want their greatness.  I think more often it’s a comparison of adequacy.  I don’t want the fame, I want to bring fame to the name of Jesus.  Without the measure of success (wins, touchdowns, stats) it’s hard to tell how we’re doing.

What I’ve come to understand is that in the Body of Christ most of us are blockers.

In many ways, the blockers are more important than the runners or the quarterback.  Without the blocking, the throw doesn’t get made, the run stops in the backfield.  In my lifetime, the only running back that made it without a great offensive line was Barry Sanders.  Consider this, no one blocker is more important than the rest, yet when one single blocker misses the play is over, it’s a sack, a tackle for a loss or worse.

In this video you can see the most important person on the field isn’t Devonta, it could be Mohammed Sanu as he blocks the very person that should have made this tackle, or it could be Alex Mack the center who snapped the ball and blocked his person, …

When you’re questioning your purpose or your impact, remember that you might be a blocker. 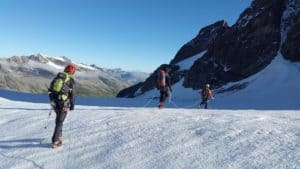